Group works for guns on campus so students can protect themselves

Group works for guns on campus so students can protect themselves

Derek Sommer carries a concealed handgun almost everywhere he goes these days, including onto the campus of Idaho State University — an illegal act until recently.

Under an Idaho law that took effect July 1, nearly 3,000 Idaho residents with enhanced concealed carry permits — people like Sommer — can bring their guns on college campuses. Sommer no longer leaves his gun at home or in his car’s locked glove compartment.

Idaho became the seventh state to allow “campus carry” in a movement gaining traction across the country, despite the often strenuous opposition of other students, faculty and campus administrators.

Spurred by recent high-profile campus shootings, grassroots groups like Students for Concealed Carry (SCC) are pushing for the right to carry weapons on campus, sometimes with the backing of larger gun rights groups like the National Rifle Association.

For Sommer, 23, a computerized machining student who founded Idaho State’s SCC chapter, carrying his handgun means protection for himself, his wife McKinley, and their 7-month-old daughter, Andi.

“It makes me angry; it really does,” he said. “I don’t like the fact that there are places where it’s considered OK to tell somebody, ‘You don’t have the right to protect yourself.’”

For others, like Boise State University student Angel Hernandez, the new law means less focus on learning and more on worrying about who’s packing a gun on campus. 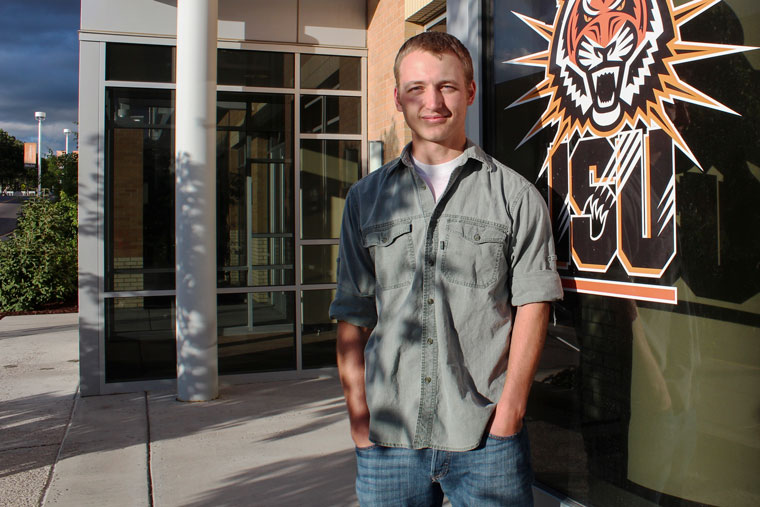 Derek Sommer, 23, an Idaho State University student used to leave his gun locked in his car when he went to class. A new law allows him to carry his handgun concealed while he is on campus. Photo by Carmen Forman/News21

“I went to Boise State to get an education; I didn’t go to Boise to go to a gun show,” he said.

Opponents of campus carry laws have saw mixed success of late. Arkansans Against Guns on Campus got state lawmakers to exclude students from a law letting faculty and staff bring concealed guns on campus if their college grants permission. Attempts to start a Colorado referendum to end campus carry there ended in failure.

Groups like SCC, meanwhile, have active chapters in at least 30 states, mobilizing as many as 30,000 students and faculty to support laws and court cases favorable to the cause, said group spokesman Kurt Mueller.

The group occasionally makes local headlines when members gather to wear empty holsters to promote campus carry — from Washington state to Michigan to Florida. It operates with little funding, relying instead on volunteers and social media for recruitment and chapter operations, Mueller said.

“We don’t have professional lobbyists,” he said. “We don’t pay anybody to lobby. People do it for free because it’s what they believe in.”

Victory in the West, Battles in the South

A News21 analysis of on-campus shootings found 87 of them, or 60 percent, have happened in the past decade. Campus carry supporters nationwide said in interviews that the increase in shootings partly influenced their desire to bring concealed guns on campus.

SCC formed after the 2007 Virginia Tech shooting, the deadliest mass shooting in U.S. history. Mueller argues an armed student could’ve stopped the shooter without waiting for police to arrive.

“The confrontation would have ended a lot sooner,” he said. “Lives would have been saved.”

Campus carry supporters point to the legal doctrine of preemption, which says only the state legislature can regulate guns in the state. No other government in the state, such as cities and counties, can make gun rules. Many states exempt K-12 schools and some public buildings from concealed carry of guns.

Oregon, Utah, Colorado, Kansas, Mississippi and Wisconsin — and now Idaho — have laws on the books that allow students to conceal weapons on campus.

A 2011 lawsuit by a division of the Oregon Firearms Federation led to a state court striking the Oregon state education board’s ban against guns on campuses.

A News 21 analysis of 42 fatal college campus shootings — starting with the 1966 University of Texas at Austin tower sniper, the deadliest campus shooting until Virginia Tech — found more than half happened in the past decade.

As for the shooters:

— Students committed 15 of the shootings

The victories are not complete. As in other campus carry states, Oregon universities insist they can limit guns in buildings, and the Oregon state board bans guns in event centers, classrooms and dorms.

In Utah, students may ask not to live with gun owners in dorms, and universities can ban guns from certain meeting rooms.

The laws on campus carry in other states vary, from letting students store guns in their cars to leaving policy decisions to the schools.

Professors from Idaho and Utah reflect on allowing guns on college campuses.

SCC’s focus next year is Texas, Mueller said. As of September, students could store guns in cars on campus. The group plans to have members write and call state lawmakers to demand more places on campus that allow concealed guns.

The law shouldn’t block licensed gun owners — including college students — from carrying on campuses, Mueller said. In some places, crossing the street could mean a law-abiding gun owner is now on campus and breaking the law.

“We’re not interested in every college student carrying,” he said. “There might be a lot of people who might never want to use or bring their firearms. If that’s the case, that’s cool. We don’t think anyone should have to exercise rights they don’t want to. But on the other hand, we don’t think they get a veto over the rights of others.”

Encouraging students to own guns raises questions for some firearms researchers.

People in the 18- to 24-year-old age range are more impulsive and at greater risk for suicide, said Gabor, who taught criminology at the University of Ottawa for 30 years and studied firearms for 20 years.

Gabor cites statistics from a 1986 New England Journal of Medicine article — an article contested by gun rights groups — that said for every one time someone shoots and kills another in a home in self-defense, about 43 other home gun deaths result from suicide, murder or accident.

“People will thwart an attacker, but I imagine many more reports of death and disabling injuries,” he said.

He sees campus carry as a gun industry move to gain customers.

Marion P. Hammer calls opposition to campus carry “nothing more than an attempt to make gun-free zones, where murderers come on campus and kill kids.”

Hammer, a former NRA president and the organization’s longtime lobbyist in Florida, said that NRA will use the state’s preemption law to push state legislators to authorize concealed carry on campuses.

“Students can’t (carry) right now, but we’re going to fix that,” said Hammer, one of 76 NRA board members.

On July 30, the Florida Carry lobby lost its suit against the University of Florida over the university’s guns-in-cars policy and whether colleges must let guns in campus-owned housing statewide. The lobby will appeal, according to its website.

Florida Carry, which is unrelated to SCC, has a reputation for using the preemption law to successfully sue cities, counties and colleges over their gun bans. Last year, the lobby successfully sued the University of North Florida to get guns allowed in cars on college grounds.

The NRA led the campus carry effort in Idaho, where the NRA state lobbyist was a regular at bill hearings. Though the NRA has been a major player in Idaho and Florida, it usually takes a supporting role on campus carry, NRA board member and former lobbyist Todd Rathner said.

“The NRA is a huge organization, and second to none in protecting gun rights. It gets spread thin,” Rathner said. “There’s a need for these (single-issue) groups. They help maintain focus.”

The NRA’s press office declined to comment for this story.

SCC and a grassroots group called Ohioans for Concealed Carry cited Ohio’s pre-emption law in a July lawsuit against Ohio State University that seeks to allow campus carry there. The trial is expected to start next year.

For Hernandez, the Boise State student, campus is no place for guns.

He is a member of the student government who joined other Idaho students to protest the campus carry law.

The students and other Idaho activists received guidance from Andy Pelosi, who challenges campus carry on a national level.

Pelosi, who is not related to House Minority Leader Nancy Pelosi, started the anti-campus carry group GunFreeKids.org in 2008.

His group focused on Idaho and Georgia this past legislative year, he said. Next year, he expects to help coordinate resistance to campus carry in Texas.

Colleges that side with Pelosi fear on-campus gun theft, threats with guns and accidental shootings, he said.

“We really believe that college campuses are safe environments, certainly safer than places off campus,” he said. “The educational environment is very different than people’s homes, and that’s not a place that guns should be carried.”

In Idaho, students and faculty who protested when Gov. C. L. “Butch” Otter signed campus carry into law, said lawmakers ignored them and listened instead to lobbyists and Idahoans who don’t work and live on campus.

Student leaders organized a rally at the state Capitol, arranged automated phone calls across the state and met with the governor’s staff to say students overwhelmingly fear campus carry.

Created last year, the license requires applicants take an eight-hour class on gun use and fire 98 rounds in front of an instructor. 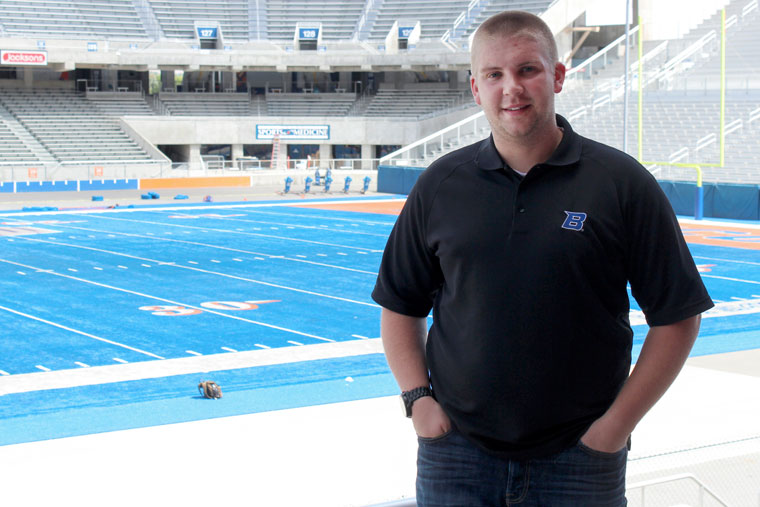 Ross Perkins, a Boise State associate professor in educational technology, criticized the campus carry movement in an opinion piece for a local newspaper. He recalled witnessing the aftermath of the shooting at Virginia Tech, where he worked and studied for about nine years.

Perkins can picture the school’s grounds that day. He felt the heavy wind, heard the sirens and watched as responders rushed the first victims out of Norris Hall. He was 38 at the time.

About once a year, he said, he visits the Virginia Tech memorial at night, when it’s quiet. He walks the semicircle of Hokie Stones, rocks mined from Blacksburg quarries, reading the names of the 32 people murdered. He tells each person his or her life mattered.

“It’s also important for us never to forget, not just the names, but the individuals who are behind those names and understand who they could have been; who they were,” he said. “It’s something we all need to take account for every day, just to remind us that life is a precious thing, and for whatever reason it can go away.”

“I hope that it never happens again. But I said that in 2007, and how many incidences can we now count that have happened since then,” he said. “It’s stunning.”

But supporters of campus carry say the Idaho opposition is a vocal minority led by Boise State administrators. Idaho state Rep. Judy Boyle, a Republican and one of the law’s sponsors, hopes to amend it to stop the university from exempting the student union building. 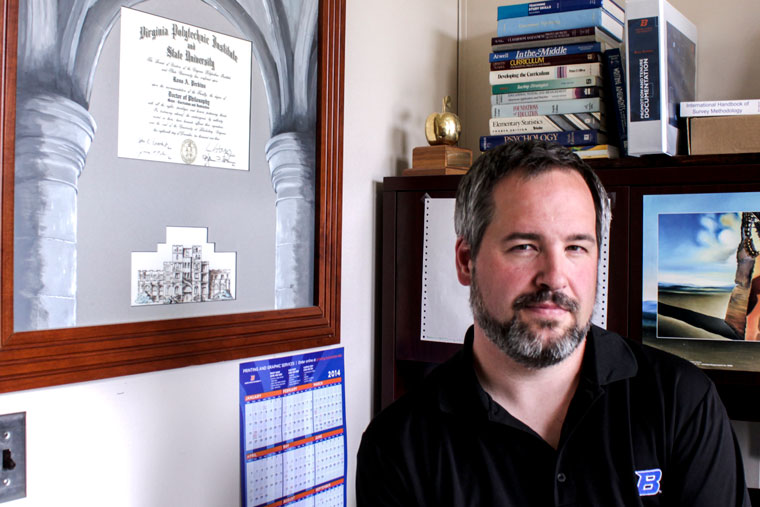 Boise State University associate professor Ross Perkins poses next to his doctorate diploma from Virginia Tech. The campus carry opponent worked at the college at the time of the 2007 mass shooting. Carmen Forman/News21.

“We’re talking about a Second Amendment right, a right to protect your life or the life of someone else,” Boyle said. “That’s why we felt it was important to give someone that ability.”

Now that Idaho State student Derek Sommer has that ability, he said he wonders if he could use his weapon should someone attack him.

“In my dream world, we could help these individuals before anything like this ever happens,” Sommer said. “Would I ever want to draw a gun on somebody? I would hate that. I don’t know if I could live with myself if I ended up taking somebody’s life, especially if it was somebody troubled.”