No appetite for gun votes in Oregon Legislature

No appetite for gun votes in Oregon Legislature

A week before the 2014 session ended in early March, it was clear that the bill he failed to get out of committee in 2013 was doomed to the same fate this year.

Prozanski had hoped to close a gap in the current background check law that exempts private firearms sales, meaning a felon could purchase a weapon person-to-person off Craigslist, from a friend or even in the parking lot of a gun show, where background checks are mandatory until you step foot outside.

“It’s a political issue,” Prozanski, a Eugene Democrat, said. “The Democrats control the Senate 16-14, and we didn’t have all 16 Democrats ready to vote for it. There’s the panic or the perception that if they somehow supported gun safety, they’re going to be held accountable at the polls by voters.”

Katie Pool and Michael DeLong — field organizers for gun safety lobbying group Ceasefire Oregon — say their group was very disappointed that Prozanski’s bill didn’t get a vote this year, also blaming politics and upcoming re-elections for keeping the bill off the floor.

DeLong says Ceasefire will try and get another background-check bill sponsored in the 2015 legislative session, along with a child-access prevention bill — an effort that spiked in interest after the June shooting at Reynolds High School in suburban Portland in which the gun was taken from a closet shared by the shooter and his military reservist brother.

Despite failing multiple years in a row, Ceasefire doesn’t believe in spending large amounts of money to pass what they believe is reasonable legislation. A ballot initiative in 2016 is possible. 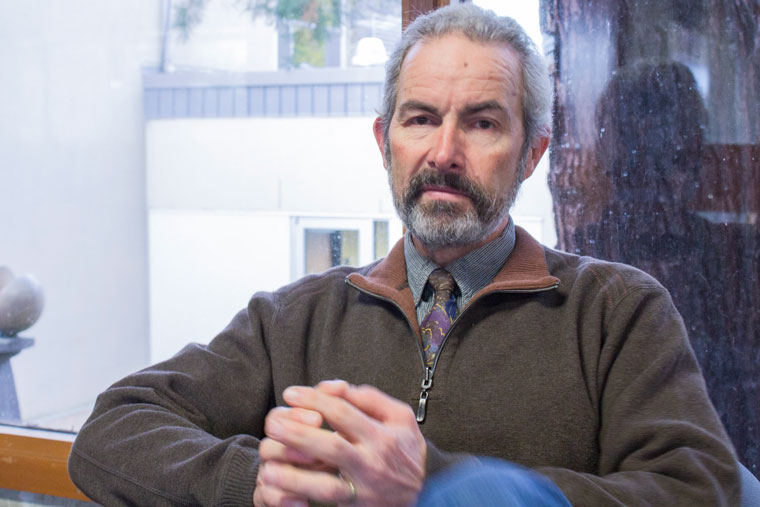 Sen. Floyd Prozanski (D-Eugene) put nearly identical bills up for consideration in the Oregon senate judiciary committee in 2013 and 2014. The bill didn't make it out of the committee in back to back years. Photo by Sam Stites/News21

“If the Legislature will not pass, or some legislators block legislation to reduce gun violence, then we will go to the people and wage a campaign,” DeLong said.

On the other side of the issue are pro-gun lobbyists like the National Rifle Association and the Oregon Firearms Federation.

Kevin Starrett, executive director of OFF, advocates a no-compromise stance. He travels around the state to speak at town hall meetings and public forums with the goal of persuading Oregon voters to not give up any Second Amendment rights at all.

“What they’ve been asking for is not what they really want. What they really want is a total ban on civilian firearm possession,” Starrett said of gun control supporters. “They make that very clear, but they can’t come out and say that, so they have a hysterical response every time a crime is committed, and they start coming up with answers to the wrong question.”

He believes the state’s background-check system does not prevent firearms from falling into the wrong hands.

“When we suffer traumatic events, it causes people to pause, step back and reflect on what can we do that’s reasonable to minimize or eliminate those types of events in the future,” he said.

“Do people have emotional responses to that? Absolutely, but that doesn’t mean we still can’t have the discussions and take the steps that are reasonable to mitigate that type of conduct. And for Starrett or the NRA to take a position that we shouldn’t do anything is disingenuous,” he said.

But Starrett says it’s the gun control advocates who are unreasonable, comparing the threat posed by gun ownership to that of driving a car. In a few months, Starrett said, his 14-year-old son will receive a permit from the state to drive a car — or a “3,000 pound bomb” as he put it.

“We don’t question that. We don’t hide our car keys, we don’t lock up our garages. In fact, we encourage our children at a young age to start operating vehicles,” Starrett said. “How many more kids are killed over the misuse of vehicles than guns? Countless.”

Looking toward the 2015 legislative session, Starrett and other pro-gun lobbyists will be looking to reverse public opinion in Oregon and get voters to make their voices heard in the Legislature.

DeLong and Ceasefire Oregon will be on the other side, telling voters to hold their elected officials accountable for taking steps toward gun safety and responsibility.

“We work with gun owners for responsible ownership,” DeLong said. “Arguments saying this is a slippery slope … Ceasefire Oregon wants reasonable laws and to reduce gun violence. We don’t want to take everybody’s guns away.”